Here is a story that started in Kanpur & made its way all the way to Mumbai. There are more than one reasons why Kushal Srivastava‘s story is an inspirational one that features in the #StayInspired section of this blogzine. When I was talking to him, I realised that his journey can be a guiding light for anyone who wishes to make it big in the world of Indian cinema. 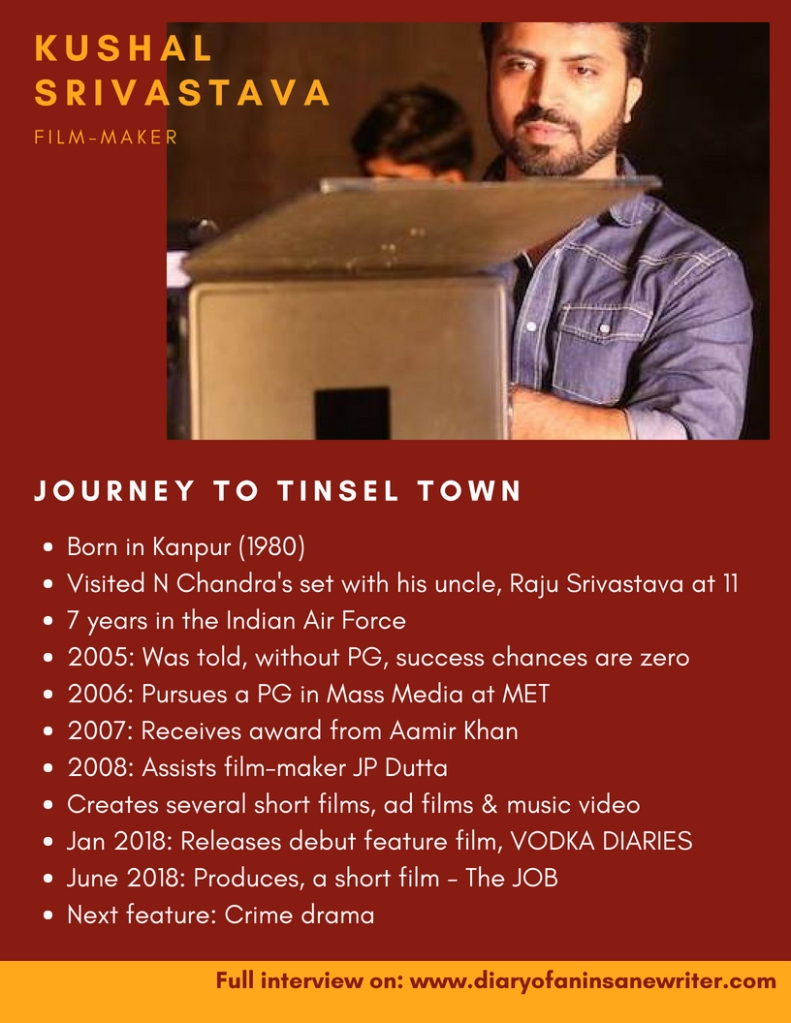 The first thing anyone will remember about him is his humility. Kushal is one of my most humble students, this boy came to Mumbai all the way from Kanpur with the “Great Bollywood Dream” in his eyes & a zeal to make it come true. Guess what his company is called? FLYING DREAMS Entertainment – he practices the sub-text each day. 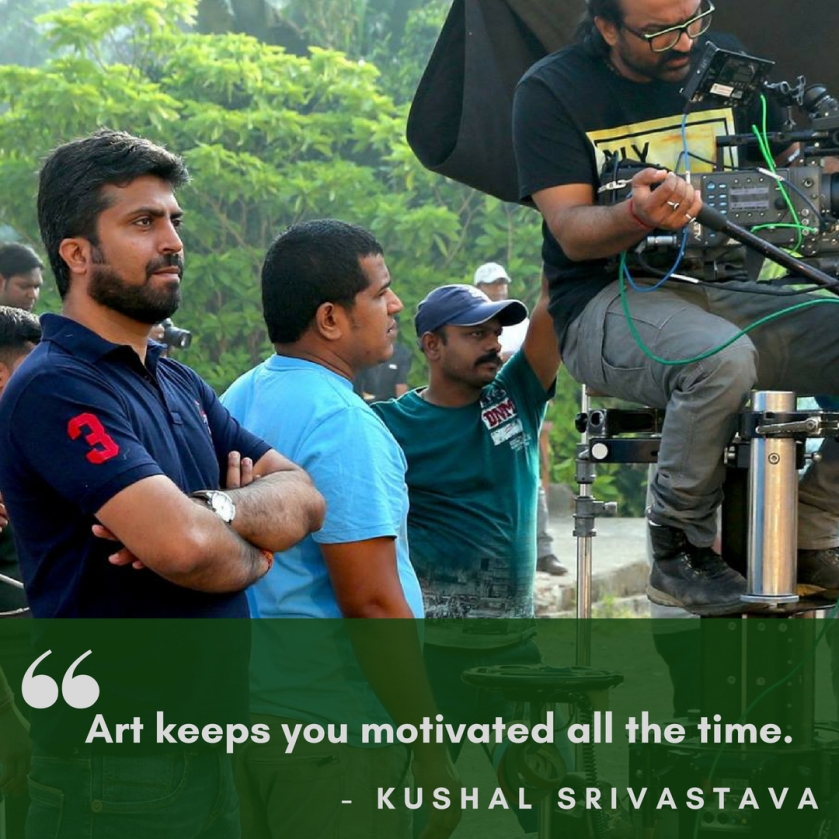 A few years ago, I received a phone call from him while I was making my way through a sea of people who were trying to locate their child. It was my son’s annual day function. I stepped aside and answered the phone on an impulse…

“Ma’am, I signed Kay Kay Menon for my debut feature film & after my mother, you are the first person I am calling…”

I had tears in my eyes, it was an honour beyond comprehension – he made me part of his joy much after he graduated from the institute. It spoke a lot about his upbringing.

I always pray for all my students…I was so happy for him & my prayers for him increased.

Today, he stands tall two suspense thrillers under his belt. The first one, VODKA DIARIES, a feature film he directed that has redefined thriller genre in India & second, THE JOB, a short film he produced, that has crossed 8.5 lakh views on YouTube. While VODKA DIARIES features, Kay Kay Menon, Mandira Bedi & Raima Sen, THE JOB has Kalki Koechlin in the lead.

I saw VODKA DIARIES twice on Amazon Prime & was super impressed with the cinematography, background score & most importantly the story-telling style.

Over a steaming hot cup of coffee on a rainy Thursday afternoon, I caught up with Kushal at a coffee shop. Here are some excerpts from our chat…

Kanpur to Mumbai! What is your earliest memory of Tinsel Town?

I was studying in the 6th grade and my vacations were going on. I had come to Mumbai and my uncle Raju Srivastava was showing me around the city. I remember we had gone to N Chandra ji’s set in film city. He was taking his shot. That’s when I experienced an epiphany – there exists a director who is responsible for designing the film completely! This is when I got attracted to the craft of Filmmaking.

I am a trained combat. I have done a rigorous training in the Indian Air Force. I have undertaken jungle training, fire fighting training, weapon training and I can fire all the weapons, I have also done small courses in Avro Aircraft. After doing this, I started from scratch with the film-making profession.

So, initially, I found it difficult to do a media class where I was studying with fresh kids who had just completed their graduation. After that also when I started doing the job of Assistant Director and was running around on set it was really tough.

“As a soldier, we are taught to keep our integrity first. And as a student of cinema you need to keep it aside & do everything it takes.”

You need to do all the running around in the world of film-making. But I guess I was very happy because I wanted to be part of it. Also, the process of trying to get a producer for filming is a strenuous task. I would keep working towards it patiently. I couldn’t lose hope at any point.

“The first time I got an award was in my college, MET Institute of Mass Media at the hands of our Founder Trustee & Vice Chairman, CA Sunil G Karve and later in a film festival I got an award from Aamir Khan. Those were the moments which made me happiest.”

“I always felt fortunate that I am allowed to follow my dreams.”

Was there a moment in your life when you felt like giving up everything? If yes, then what kept you going?

While working in Air Force, I had done MBA from Symbiosis Centre for Distant Learning (SCDL) So after leaving Air Force when I went to job interviews, someone told me I can’t reach the top level of management ever in my life as I don’t have a regular Post Graduate degree. I felt very bad.

“After working for 7 years in Indian Air Force, still I had reached nowhere. I felt like giving up. Thats when I decided to take a break from career and join a post graduate course.”

And I came to Mumbai and joined MET for a postgraduate degree in Mass Media and decided to pursue what I love. That gave me enough confidence to pursue my career.

Apart from friends, who were the people who stood by you during your film-making journey?

There are many people who helped me in doing what I wanted to do. My parents stood by me in all my decisions.

“In Mumbai, I came to my uncle Mr. Raju Srivastava and he helped me a lot and always guided me well. He has been an inspiration for me.”

“My Guru, Mr. J.P Dutta taught me the craft of film making. Whatever is being liked and appreciated by the viewers in my film it’s all because of him, be it the art of storytelling or other technicalities. I have completely learnt the artistic side of filmmaking from him.”

I am thankful to him and Bindiya Goswami ji for doing my film’s mahurat. I am lucky to get the chance to approach Rekha Bhardwaj ji to sing the most important song (Sakhi Ri along with Ustaad. Rashid Khan ji) in my film Vodka Diaries. I want her to sing in all my films.

“I am also inspired by Vishal Bhardwaj ji. In my college days we were taught his films. I was delighted to hear him appreciate Vodka Diaries.”

Vodka Diaries was a brilliant film! Can you share incidents of how you roped in Kay Kay Menon and Raima Sen for the role?

We had written the story keeping Kay Kay in mind. There was no second choice. I guess it was the story which helped us in convincing him. Once we had him with us, things were all sorted for us. We got whoever we wanted on board. Even Raima Sen & Mandira Bedi also were the first choices for their characters.

Working with a great and gifted actor like Kay Kay Menon and making him emote in a never before manner – how did you do it?

Surely he is one of the best actors we have. It was a delight to work with actors like Kay Kay, Raima & Mandira. They were all down to earth.

“Kay Kay becomes your friend, he never let me feel that it’s my first film and I am working with such a senior actor. He will listen to you with full attention all the time.”

You just keep making sense and you will have his undivided attention as long as you want. And more importantly, he doesn’t have an ego. If you correct him on set, he would say ‘Thank you’ to you with a smile. This kind of attitude spreads positivity and motivates the entire crew. The kind of involvement he showed from day one is amazing. We used to rehearse for 7/8 hours in my office before starting the shooting schedule.

Which project are you working on at present?

Recently, our one short film called ‘The Job’ featuring Kalki Koechlin got viral. I had produced it. It’s directed by the very talented young director Siddharth Sinha. We are making a few more short films for big brands.

When do we get to see your next feature film…?

I am working on a crime drama feature film script, based in Uttar Pradesh. We are doing a detailed research for that these days. Recently we met top officers in UP Police, researchers and Crime reporters.

How did your parents react to your life choices?

I was working in Indian Air Force and I thought convincing my parents would be tough. But I showed them my dream and they believed in it. I am thankful to them for having faith in me and standing by me all the time. They are my strong support.

My team is also like family. My cousin Antara has also joined me. She has been working with me for 6/7 years now.

Please share a message with our readers who wish to make it big in Hindi Cinema but don’t know how to go about it.

Every film has its making, which shows all the preparations and hard work which go into making a film. It’s the same progression with each and every individual. It should not be called struggle at all. It’s the making of that person.

One should remember that he or she is working hard to achieve his own dreams. It gives you all the pleasure in the world. I was always very happy since ‘Day one.’ Your passion would never make you feel otherwise. Art keeps you motivated all the time. Pain is a very good emotion. It makes you realise how strong you are. Never give up because of it, instead try harder.

“In the film industry, the only shortcut is hard work. Always be honest with your dreams and be loyal to your people. It’s like being honest to your own self. Follow your heart and gut feeling always.”

After tabling this interview, I felt like a happy Mother Hen. Hope this interview left you inspired. Do leave your comments and questions for Kushal. I will surely get them answered from Kushal.

You can also follow Kushal on his social media handles: