Today’s youth is fearless just like we were. Many of us took flight while others were lost in oblivion. The fundamental difference lies in the way today’s parents nurture their prodigies.
Mayura Amarkant spoke to mothers whose children have made a mark even before they hit 18.

In days of yore, “log kya kahenge” (what will society say?) has damaged more careers and morale than any other catastrophe. Social conversations were dotted with parents boasting about their child’s academic achievements. Family time meant intense discussions on grades & projects. India is changing. Today we see a fresh wave of new-age parents who take efforts to recognize, support and nurture their child’s talents.

Devendra & Rachana Darda discovered their 10-year-old son, Aryaman’s passion for wildlife photography during a holiday to a crane reserve in Africa. He watched his father and insisted on using the camera himself. When his parents saw the work, they realized that their child was gifted.

Today, five years later, 15-year-old Aryaman teamed up with his mother to put up a Wildlife Photo Exhibition. It was inaugurated by philanthropist, Sangita Sajjan Jindal and ace photographer, Atul Kasbekar at The Annexe Art Gallery, Mumbai. Maharashtra’s CM, Devendra Fadnavis and his wife, Amruta Fadnavis were all praises for Aryaman’s work.

Elsewhere in Mumbai, another 15-year-old, Abhishek Roy has published his fiction novel, ‘Father of the Gods’ published by Quills Ink. “We knew he loved history and planned our holidays where the best museums were. Abhishek has traveled 24 countries to research. He reads encyclopedias during his spare time and started writing when he was 13.” says Baishali Roy, Abhishek’s mother. This unique novel blends in elements of ancient history, mythology and physics. The 2nd print run of the novel is underway along with the sequel.

Pune-based, 16-year-old, Siddhant Joshi researched the World War II for eight years. “He wrote two novels and trashed them. We are now finalizing his fiction novel, ‘5 Minutes Longer’ with a publishing house. As a writer, I understand his evolution and supported him wholeheartedly.” says Leena Joshi, Siddhant’s mother. She, along with her husband, Abhijit Joshi, an ex-Army man, run Red Tree Design Studio Pvt. Ltd.

Baishali shares that her son was inclined towards writing and didn’t undergo any formal training. On the other hand, the Dardas felt that formal training was critical. “Our son has grown up on a staple diet of Animal Planet and National Geographic. When we discovered his hobby, encouraging him to take up formal training was the next logical step.” shares Rachana. Aryaman trained with an ace photographer, Himanshu Sheth and is currently studying at ‘Institute Le Rosey’ in Switzerland. Devendra is the Managing Director of Lokmat and Rachana is a fashion designer.

Abhishek studies in Dhirubhai Ambani School in 12th grade. Baishali has completed her Masters in Science and his father, Joydeep is an IIM Kolkatta alumnus who works with Price Waterhouse Coopers.

“With the family deeply rooted in academics, Abhishek did well in studies as well as writing. Woh likhta hi rehta hai. His second book is going to be out soon, it is called Land of the Gods.” remarks Baishali.

Rachana says that her son inspired her to learn photography. “I have always been in the field of art but watching Aryaman inspired me. To be featured alongside one’s child’s work is the biggest satisfaction that any mother can get. The proceeds of the exhibition will go towards Aryaman’s foundation, The Little Planet, that is working on conserving nature.” 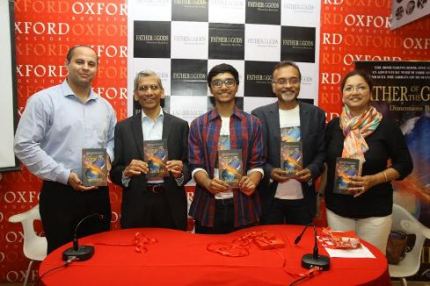 Exchanging ideas forms the fundamental foundation of this today’s parenting. Parents who indulge in open communication say that their children are expressive & well adjusted. “We spend time on understanding each other. It happens so naturally that I never realized that we were following a process.” shares Leena.

“As parents, all we can do is keep the conversations going. Kids of today have better exposure and knowledge than us. Parenting styles have thus changed.” says Rachana.

Baishali shares, “At meal times, we share highlights of our daily routines with a special focus on what Abhishek wants to speak about. That way he is able to share ideas, get our opinions and express himself.”

Some parents say that adolescence is worse than the ‘terrible-twos’. How do new-age parents handle extremely creative adolescents? “Just like any other normal teenager, Aryaman had his share of mood swings. What kept him going is the faith that he had in us. His father is a very patient person and we decided to be his friends and understand his psyche first. That is where we won the battle.” confides Rachana.

Baishali, on the other hand, has had a different experience. “Abhishek has been a stable child and has hardly had mood swings. We have been blessed,” she says.

“Every day, is not the same. The onus lies on us as parents to keep calm. We need to focus on cultivating the right values and encourage their way of thinking. We faced banter from society about Siddhant’s choices. We chose to believe in and support our child.” remarks Leena.

Watching one’s child step aside from the mainstream is a new concept. How do today’s parents deal with apprehensions?  “Never did we once have a doubt on our child’s capacities. Pursuing photography has added a dimension to his thinking. We have allowed him to remain in his zone and are confident that he will choose the best path for his future.” said Rachana while speaking about their parenting style. “We don’t know what the future holds. But I can proudly say that we have equipped him to face every kind of challenge in life,” says Leena.

In the past, the child’s interest, capacity and capability inclusions were unheard of concepts. Those were tough days, where square pegs were being force-fitted into round holes. Parents are today picking up their children from the rat race and allowing them to create a race of their own. Such children will create powerful stories for themselves and the world.

Here are some more posts on Parenting: