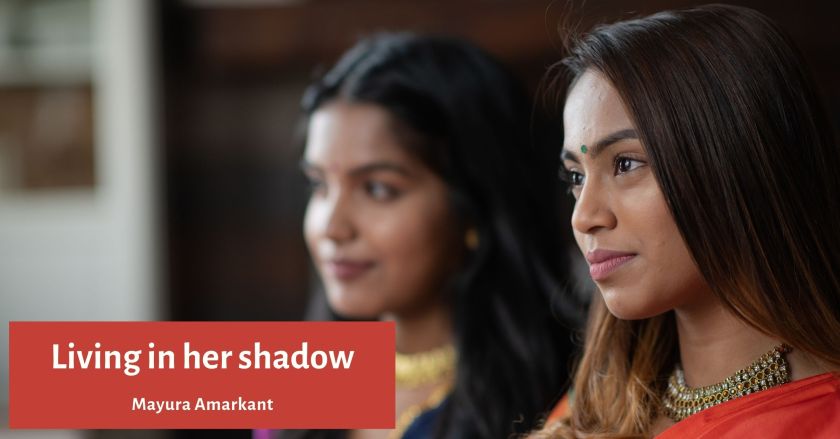 Bhagwati rushed into the room and tapped Jasmine on the shoulder lightly, “Hey Jasmine Didi, Maa is calling you…”

“Can’t you see I am busy?” Jasmine retorted in a subdued irritated tone as she continued to preen herself in front of the large oval mirror in the master bedroom. She ran her slender, well-manicured fingers through her long ebony-coloured hair and smiled to herself.

“Jasmine Didi is busy Maa, I am coming to help.”

Bhagwati strode towards the kitchen.

Jasmine and Bhagwati were born of the same mother but were at two ends of the spectrum in terms of beauty, nature and intelligence.

13-year-old, Jasmine was stunningly beautiful, haughty and the centre of attention at every social gathering. She would adjust her nature as per the person and that ensured she remained popular everywhere. Teachers at school would entrust her with important responsibilities and cover up her mistakes when she looked at them teary-eyed.

Jasmine’s younger sister, 12-year-old Bhagwati was sincere, conscientious and the dependable daughter of the house. She wasn’t ugly nor was she stunningly beautiful. Just an ordinary girl next door with a simple demeanor. You would always see her around Jasmine and was her trusted lieutenant.

Since the age-gap wasn’t a lot, the parents put them in school in the same class. Jasmine and Bhagwati were always seen together. The pretty one would stride ahead and the simple one would follow her like a cute puppy.

Years passed by and things remained in status quo until they finished their board exams. Something changed when they entered college. Jasmine fell in love with the idea of getting married. She would spend hours trying on different dupattas, make up looks and often dolled up as a bride.

She had a crush on every male person who she came across. Her craze to get married drove her to stand at the balcony staring at the weirdest men. She had a crush on the paani puri wala just because he gave her an extra puri and almost thought of running away with the balloon seller who casually gave her a red balloon while she was choosing balloons for a friend.

Her parents were extremely worried and spent sleepless nights wondering about their beautiful, elder daughter’s future. When she turned 18, Jasmine’s father decided to get her married. He just couldn’t take her queer behaviour and felt it was safer for her to officiate her craze.

Jasmine was on top of the world and rejoiced when her parents told her the news. Kewal Kumar Upadhyay, son of a noted businessman, Ashok Upadhyay was coming to see her that evening. Jasmine hugged Bhagwati tightly and both of them did a brief happy dance.

Bhagwati helped Jasmine get ready. She had gained a qualification in hair and beauty and her sister was her favourite muse. They had practiced the “groom-dekho” ceremony look and had perfected it by now. She looked extremely beautiful (as usual).

After getting ready, Jasmine was admiring herself in the oval mirror. Bhagwati had gone to freshen up and change into something nice. Jasmine was humming to herself and dancing in front of the mirror. The entire room resonated with her cheerful and melodious voice. She stopped in her tracks when she saw Bhagwati who had just entered the room.

“What are you trying to do, Bhagwati?”

“The dress, your make up…what is the meaning of all this.?”

Jasmine nervously referred to Bhagwati’s plain salwaar kameez, minimal accessories and nude make up. There was nothing apparently wrong about her appearance however, Jasmine seemed visibly upset.

Bhagwati stepped closer to her sister, “I didn’t understand, Di”

“Stay away from me, I know your plan, you want to charm your way to Kewal and spoil my prospects of getting married. You just want to prove that you are prettier and better than me.”

Bhagwati just couldn’t understand why Jasmine was behaving this way. She had never seen her sister in such a manner. She started crying as Jasmine threw the worst tantrum of her life. Her parents rushed in to calm her down.

Jasmine calmed down only when she was assured that Bhagwati wouldn’t come in front of Kewal or his family till the marriage was done.

“Kasam kha, Bhagwati, kasam kha….shaadi hone tak tu tere Jijaji aur Didi ke saamne nahi aayegi.” Her father frantically yanked Bhagwati’s hand, put them on her mom’s head and asked her to swear. All this while Jasmine was bawling like a baby. She kept insisting that Bhagwati wanted to usurp her glory.

A sobbing Bhagwati agreed to their terms. With trembling hands she started fixing her sister’s hair and soiled make up. Jasmine’s mood changed – as though nothing had happened.

A few months later, teary-eyed Bhagwati watched from behind the curtains as her favourite Di went off with her Kewal Jijaji. As promised, she had stayed away from the limelight in the wedding.

A few years later, Kewal was making mad love to a woman, he seemed like a slave to his desires. The room was lit up with pure, naked passion. He didn’t stop, and she goaded him to continue. They climax and sink into each other’s arms. He nudges her with his nose and said, “Marry me, please, marry me.”

Bhagwati turns her face away, smiles while getting dressed and exclaims, “I can’t marry you….Kewal…after all you are my Jijaji…” they hug and Kewal’s back is facing the door.

The door flings open, and Jasmine unknowingly enters the room. She sees them in bed and gasps. Bhagwati hugs Kewal tighter and gives a spine chilling smile to her sister….

Years later, Bhagwati marries a handsome hunk, Amol and has 3 kids. She continues to flirt with men and books her afternoons for a daily dose of fun and frolic. Jasmine and Kewal undergo marriage counseling, and the counselor refers Jasmine for psychological evaluation for her problems. She would often tell her counselor many stories about Bhagwati, all of which were written off as figments of her imagination. Bhagwati would often visit her Di and lovingly take care of her while Jasmine continued to shout, yell and throw a tantrum.

‘This post is part of #StorytellersBlogHop FEB 2021 hosted by amazing hosts: