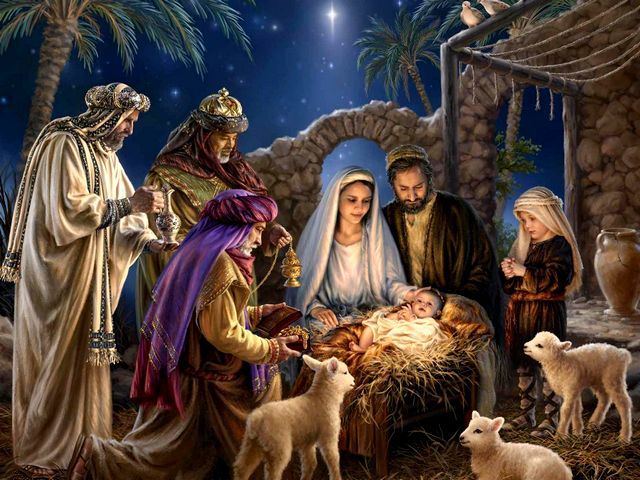 Over the years, Christmas has become a great festival for fellowship & bonding that spreads positivity and cheer.

Its that time of the year when almost every nook and corner across the world is lit up with Christmas trees and effigies of Santa Claus everywhere. Offices celebrate ‘Secret Santa’ and people gift each other. The entire atmosphere is full of happiness and joy. Social media is flooded with pictures of Christmas Trees, Santa Claus, Snow Man and lit houses. But there is something MISSING…read on to find out…

Tell us what is missing in the Fig. 1.1 and stand a chance to win a prize!

Christmas is NOT about Christmas Trees and Santa Claus. It’s much more than that. Its the celebration of the birth of Jesus Christ, our savior. This blog post is an attempt to put Christ back in Christmas.

Reality: Its the celebration of the birth of Jesus Christ, our saviour.

Myth: Santa Claus is a divine figure who is worshipped!

Reality: He is a fictional character created to discipline children with a promise for gifts in return for good behaviour.

Why is Christmas celebrated?

We Christians, believe Jesus was the son of God born by immaculate conception to Mary who delivered him in a humble manger in the presence of His father, Joseph.

The name ‘Christmas’ comes from the name given to the Mass of Christ (Jesus) where Christians remember that Jesus gave his life for us and was resurrected on the third day. The name Christ-Mass was shortened to Christmas.

The New Testament in the Bible contains two & not one but two stories of the birth of Christ. The nativity of Jesus or the birth of Jesus Christ is described in the gospels of Luke and Mathew in the Bible. They have some points in common. But there are many differences in their characters, plot, messages, and tone. As children, my grandfather who himself was a priest taught us a combination of both these stories.

As a child, this story appeared magical to my siblings and me. We loved the way our grandfather narrated it. We enjoyed enacting it during Christmas celebrations at church every year.

The Story of Christmas

(As my grandfather, Rev. Nilakanth R. Makasare taught me & my siblings)

Mary of Nazareth in Galilee was engaged to Joseph. One day, God’s angel, Gabriel appears to her and tells her that the Holy Spirit would come upon her and she would give birth to a baby whom she should name Jesus also known as Emmanuel meaning ‘God with us’. Gabriel also tells Mary that the baby is the Son of God who would rule Israel forever.

When Joseph learns this, he secretly decides to break the engagement. An angel appears in his dream and tells him how Mary is blessed to be the chosen one to deliver the Son of God. He decides to marry her and they don’t consummate the marriage till Jesus is born

The Emperor of Rome commanded a nation-wide census & thus Joseph travels with pregnant Mary to Bethlehem, the city of David since he belonged to the House of David. After registering themselves, they looked for a place to live. Since people from all over were visiting Bethlehem all the inns were full. Mary was experiencing labor pains and time was near. A kind inn-keeper allowed them to live in his barn.

Baby Jesus was born in a humble barn where His mother wrapped him in swaddling clothes. The gospel of Luke says: on the same night, the angels appeared to a group of shepherds who were taking a nap. The angels announced the birth of Christ and the shepherds hurriedly traveled to worship the Messiah.

The gospel of Mathew also mentions the visit by Magi (three wise men/kings) who travelled from the far East following a star. This sequence talks about the impending danger to the life of the newborn and His parents.

The Magi visit King Herod, the Roman Emperor and enquire about the birth of the king. Herod tells them that their predictions are incorrect and the Magi kept following the star in search of the new king.

Each of the three presented a gift to the newborn.

For Christians, the visits by the shepherds and the kings symbolises that people from all backgrounds came to visit baby Jesus. Thus telling us that Jesus was the King across masses and classes.

The story goes on that the King Herod views the new king as a potential threat and thus orders execution of all boys under the age of two in the area of Bethlehem. The family flees to Nazareth and returns after the death of Herod. At each point during their travel. the family is guided by dreams and the scriptures.

Here is a video that will tell you more about this fascinating story:

Your children will love this video:

Do you have any questions about the Story of Christmas? Do leave your suggestions in the comment box, would love to read them.

On that note, hope you have a fantastic Christmas and a very Happy New Year! God bless!!